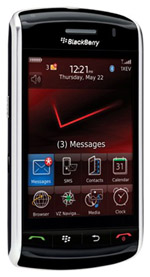 So.... back in November I wrote an article titled BlackBerry Storm - FAIL. I basically summed up several reviews I read that said the storm was a good attempt at a cellphone, but that it didn't quite make it.

Well.... that was almost two months ago and things have changed a little from my perspective. On Saturday my BlackBerry Pearl suffered an untimely death when it took a bath in Dr Pepper. So yesterday I made a trip to our local Verizon Store. I played with all the BlackBerrys before finally laying my hands on the Storm. I had read the reviews, so I immediately started trying to see the flaws so many pointed out.... but I couldn't find them. The sales rep at the store told me RIM had released a new software update for the phone, and that it fixed most of the issues.

I played with the phone for quite awhile before finally deciding, the BlackBerry Storm was the phone for me. I will write a full review of it from the perspective of a non iPhone addict. But for now... I think it is is sufficient enough to say.... I love the BlackBerry Storm. Related Articles
Comments: 1 (View | Post)
Tags: blackberry, cellphone, phone, review, storm
Categories: Reviews, Technical

There are 1 comments on this article

I've found that if you want criticism on a product - you CAN and WILL find it.

Of course, when you're trying to find it about the iPhone - it definitely gets hard :P har har jk

Glad you took the leap to the Storm - hope you enjoy it!