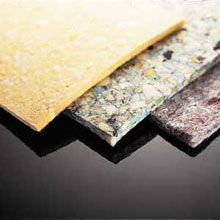 So, my wife and I decided it was time to replace the carpet in our master bedroom. Not that the carpet was old, but our house flooded in the spring and there's been a musky smell to it ever since. We found some carpet we liked from a gentleman at the local Flea Market, we'll call him "Frank". I don't want to mention his real name because over all I really do like the guy, I just have to get this off my chest. So anyways...

We found the carpet on Sunday, September 28th. Unfortunately, we didn't have my truck so we had no way of getting it home. We paid for it though, and told "Frank" we'd come pick it up the next weekend on October, 4th. He said that wasn't a problem and asked if we needed any padding. I told him we probably would, but that I would call him in during the week to let him know. He said, "Oh, you don't need to do that, I have plenty" and he points to a bunch of pad in the corner. I'm sure you can already see where this story is headed but...

The 4th arrives and I take my truck down to "Frank"'s to get the carpet. We load it up and then I tell him I need 20 yards of padding. He says... "Mmm, I'm not sure I've got enough, I knew I should have brought more in." I tell him that's okay, I'll get it somewhere else and he said, "Oh no no, I've got a warehouse just a little bit down the road. If you want, you can come by this week and get it." So I tell him okay, and he gives me his card with his warehouse address on it.

That takes us to last night. I called "Frank" to see what time he gets to his warehouse so I could pick up padding this morning. He told me he gets there around 8, but to call him on my way just to make sure he didn't oversleep or anything. So this morning I get up bright and early, get ready, and start heading to his warehouse (which is 25 minutes from my home). I call him at about 15 til 8 and ask if he is at his warehouse yet. His response.... "Yes yes, I'm here... but, I'm not sure if I have enough padding for you. How much did you need again?" I tell him 20 yards and he tells me he'll measure and call me back. He calls me back in 10 minutes and tells me he only has 14 yards.

So now, it's 7:55 in the morning. I need padding for my carpet that is suppose to by laid at 9:00. My only choice is Lowes. I do a U-Turn and head back toward home. I get to Lowes at 8:10 and go to the carpet padding. Of course, they only have three remnant pieces, two of which don't have their size marked. I ask someone for help and it's clear they are clueless about carpet padding. I tell them I need one roll of 7/16 carpet padding and he says, "well let me see what I can do" and he walks off. About 3 minutes later another guy comes up to me and asks if he can help me. I explain what I need, and that I didn't think the first guy understood. He says he'll go get it and off he heads.

Ten minutes go by and the first guy comes back and walks right by me without saying anything. I ask him, "so, did you find what I needed?" He answers, "Yeah, Chris is getting it."

Ten more minutes go by and a third employee now asks me if he can help me. I explain to him that some guy is suppose to be getting me padding and he says, "Oh yeah, Chris is getting some padding. It's on the top shelf though and the lifting crane is broken so it may be a few."

Another ten or fifteen minutes pass and finally Chris come dragging my padding. I drag it up the front counter and... of course, the cashier doesn't know how to ring up padding. There is no tag on it or anything. She asks me what it is, so I tell her and she looks it up in the computer. She then asks me how much I got of it. I tell her 45' x 6', but that I think they do pricing by the square yard. She says she does not know, so she calls someone to ask. THE FIRST GUY comes up, the one who knew nothing about padding, and tells her "no, we sell by the foot, charge him for 45'." So she does, and I pay, because at this point is 8:55 and I need to leave.

So, I have to go back tonight and complain that I was over-charged on the padding, because I should have only been charged for 30 square yards, but instead they charged me for 45 because they thought it was billed by the foot.
Comments: 0 (View | Post)
Tags: business, carpet, complaint, lowes, review, unprofessional
Categories: Reviews