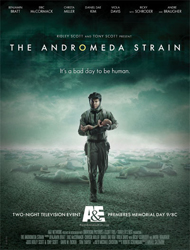 On May 26 and 27, 2008 A&E aired a 4-hour two-part television mini-series of Michael Crichton's best selling book, The Andromeda Strain. I wasn't able to watch it at the time, but DVR'd it for future viewing pleasure.

That pleasure came last night at 10PM. My wife and I grabbed some snacks, hopped in bed, flipped it on and began to watch. Now, while I can't say it was the worst movie I've seen, it certainly left a lot to be desired. The acting was poor, there were several things that just didn't really make sense, and worst of all, there was nearly an hour of commercials (thank goodness for DVR's fast-forward option). All and all I'd give it a 5 out of 10.

It did do one thing for me though, it got me wanting to read the book which has been sitting on my book shelf for years collecting dust. The plot was good, the movie directors just did a poor job executing it. So I guess that's a thumbs up to Michael Crichton, and a thumbs down to Hollywood.
Comments: 0 (View | Post)
Tags: andromeda strain, book, michael crichton, miniseries, review, television, tv
Categories: Reviews